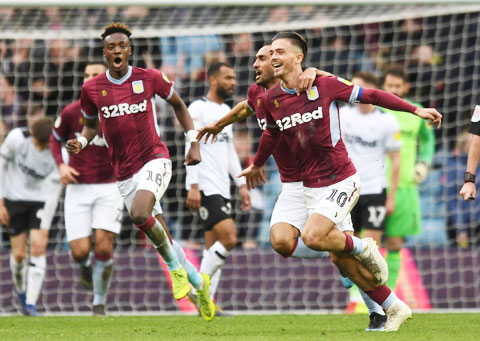 Striker Patrick Bamford scored a hat-trick, helping Leeds win 3-0 on October 23, cutting off the winning streak of Aston Villa in the Premier League this season.

Aston Villa is a phenomenon in the Premier League this season, having won all four matches. With only one point behind Everton, being kicked at the earliest in the sixth round and having home advantage, Dean Smith’s teachers and students have the opportunity to extend an impressive start, and at the top of the board for the first time since October / 2001.

But Aston Villa only paralleled those dreams until the end of the first half, then collapsed before Leeds’ crazy attacking football. On the lucky night, Bamford scored all three, helping Leeds win all three points away, while himself has six in the Premier League. Away kick, but Bielsa’s students kept the ball 60%, finished 23 shots, cut only 10 shots on the home side.
In the last home game, Villa was like a hungry lion, scoring seven goals against Liverpool, but yesterday, they were just like a kitten against Leeds. The whole game, they had only one dangerous situation, when captain Jack Grealish was knocked down by Helder Costa in the 16m50 area, but both the referee and the VAR team refused to consider the penalty.

Villa played brighter after the break, but Leeds was the team that opened the scoring in the 55th minute. In a counterattack like electricity, the ball was passed into the penalty area for Rodrigo to finish. Goalkeeper Emiliano Martinez blocked this shot, but was helpless when Bamford kicked in. Bamford doubled his advantage for Leeds in the 67th minute with a nice shot into the top corner from outside the 16m50 area, before making the score 3-0 with another slash in the box.

Towards the end of the game, Villa became more and more depressed, while Leeds continued to create opportunities. Bamford failed to eat with a header that brought the ball into Martinez’s reach, and Pablo Hernandez hit the bar.

In the next round, both played at home, Aston Villa hosted Southampton on November 1, and Leeds played Leicester City on November 3.